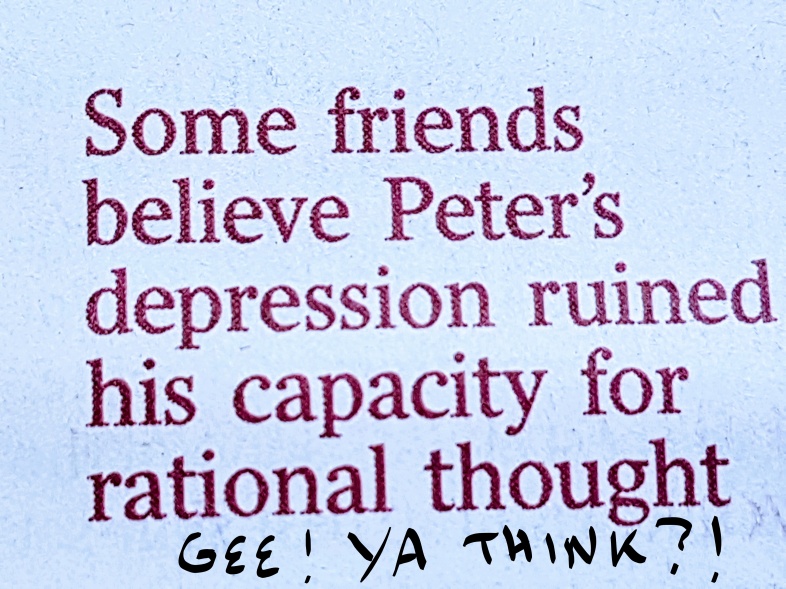 I had plans for this post to be much softer than the last. No politics or indignation…

I started with excellent intentions. I slept in, made banana pancakes for breakfast, a big plunger of coffee, got the paper, and planned to read about the royal wedding preparations, the politics of which I am not particularly invested in.

So, I opened The Weekend Australian. I never got to the royal wedding preparations on page three.

On the front page the following words tore at my eyeballs:

It referred to Peter Miles who recently died by suicide after murdering his wife, daughter, and four grandchildren. When this story originally broke, my first thought, as it is every time this happens, was:

‘What are the chances an undiagnosed or poorly managed mental illness is the cause of this horrific situation?’

Often journalists don’t mention mental illness as a possibility, and if they do they don’t  go deeper than the mention.

So, when this headline smacked me in the brain this morning with its possible acknowledgement that mental illness may be part of the story, I could not progress to the wedding prep on page three. The second reason I couldn’t let it go was this priceless quote:

I am aware the public don’t know enough about mental illness, but this level of ignorance quoted in one of the country’s leading newspapers is breath taking:

‘Some friends believe…’ – not ‘It is a known fact that even mild mental illness can interfere with rational thought.’

The definition of mental illness is that it affects our thoughts, feelings, and behaviour in unpleasant and sometimes horrific ways. To quote my own psychiatrist:

‘You can’t think your way out of it, it doesn’t matter how clever you are.’

Peter’s friends then continue to be cited as sources of what could be construed as expert opinion by the many who won’t know better:

‘They (the friends) point to claims that some antidepressants can trigger suicidal, and even homicidal thoughts.’

His friends are right. As with all medications to treat serious illnesses there is a risk of nasty side effects, which is why you need to be under the care of and monitored closely by a medical specialist when you take them.

Instead we have this situation:

‘A handful of people also knew he had been prescribed antidepressants that did not seem to be working and that he had recently increased the dose or changed medications in an effort to recover his mental health.’

I try not to rely on swear words to get my exasperation across, but: HOLY FUCK!

Who prescribed the antidepressants? When did that person – presumably a GP or a psychiatrist – last see Peter Miles for a full consultation? Who increased the dose of his medication or changed medications? Did the public mental health system fail him, or did he have private health insurance, but stigma prevented him from accessing the best care?

Why is nobody asking these questions?

Not asking means seven people spanning three generations in one family died in vain, nothing is learnt, and this will keep happening.

If I were as sick as Peter Miles sounded, I would be in hospital with my psychiatrist of eleven years checking in on me every single day. If I seemed suicidal I would be on fifteen minute observations in a safe space. I have never had homicidal feelings. I am not arrogant enough to claim I never would, because my illness has made me feel and think and say things I never could have believed possible. However, if I developed homicidal feelings I imagine I would go into the Special Care Unit of the hospital until I was well enough to feel safe again. If I needed a medication dose increase or medication change, I would make that decision in consultation with my psychiatrist, and we would discuss all the potential risks first. If I developed severe side-effects, I would go into hospital until they were treated, and I and my family would be safe.

But then I have the benefits of insight, a lack of stigma in my life, and most importantly private health insurance, which gives me access to the highest level of psychiatric care available.

I can’t help but wonder: Did Peter Miles have any of those things on his side?

This beautiful creative endorsement of my book was posted by my friend and fellow writer @sarahtodmanwrites
This Thought Food post poses a couple of questions about (and to) freedom fighters about how they choose which pieces of medical advice to accept and which to reject. It's an opinion piece, with a bit of prickliness to it. Feel free to discuss and share. Click on link in bio to read.
This local book club (including Rachel who took this photo) read ' Abductions From My Beautiful Life' and invited me to join them for a chat about it last night. I thoroughly enjoyed an evening of catching up with these lovely women and answering lots of great questions about the book.
Another Thought Food post made it onto Mamamia. It's in the form of a letter from me today to me 15 years ago, when my first baby was due. And it includes my thoughts on what not to worry about as a new parent.
I wrote a letter from myself today to myself in 2006 on my first baby's birthday, titled 'Welcome To Motherhood' I definitley have a better idea of what I'm doing now. To read some of the thoughts and suggestions I had for my new mother self - hop into the link in bio.
I would never claim to know as much about astrophysics, palliative care nursing, horticulture, teaching, hairdressing, and most other professions and jobs as the people who have been trained or gained the experience to do them.
Loading Comments...
%d bloggers like this: