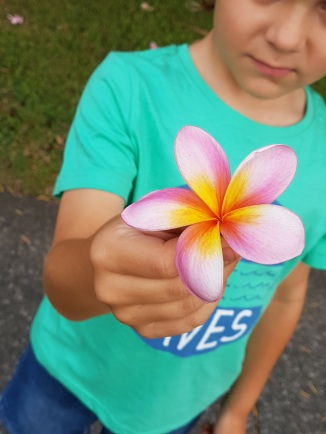 ‘Mum, can your Bipolar kill you?’

The ten-year-old asked me out of nowhere a year or so ago. And I had been well, for a couple of years at that stage. I always find, the longer I am out of hospital, the more of my life I reclaim, the harder it becomes to imagine ever getting that sick again. So, the instant answer that flashed behind my eyes was:

‘No, of course not darling.’

Because after all, the thought of dying is too horrible to bear, let alone articulate. But bitter, repeated experience with the pattern of my illness has taught me that while it’s good to be optimistic when I’m well, I know at some point I will get sick again, and while I am extremely fortunate to have access to excellent care, the nature of the illness means there is a small chance it could kill me.

I pause as I push down the ‘of course not’ and search for an age appropriate truth. Then I settle for:

‘Yes Bipolar Disorder can kill you. But the chances of that happening are small for me, because I have a very good doctor whom I trust. And so far, every time I’ve gotten sick, the hospital and my medicine have made me better. And right now I am well, so the chances of me dying are not really any greater than for anyone else who doesn’t have Bipolar Disorder.’

Communicating with children about mental illness is challenging, because the evidence for it is not as tangible as a bandage or a bruise. The symptoms can make it easy for children to blame themselves for their parent’s illness, especially if the parent’s illness is unmanaged and what is happening isn’t explained to the children.

Often the hardest thing about talking to kids about mental illness is leaving our own fears and preconceptions about it out of that conversation. However the conversation goes, it should be with someone who is well enough to have it. Either the parent when they are well, or with an adult the children trust, who has the facts, and someone who is deeply empathic towards the patient. It needs to be truthful in an age appropriate manner, preferably including the name of the illness. My children are now old enough to know I have Bipolar Disorder. When they were younger we would tell them that I was sick because something in my brain (or when they were really young – ‘head’) wasn’t working properly or was broken.

The conversation should give hope but not make promises that can’t be kept. The unpredictable nature of mental illness means you often can’t give a child a definite time frame about when their parent will be better. I have found telling them I would get better, I just didn’t know when, or that going into hospital would be the fastest way to get me better, helpful. And someone should always, always make sure the child or children know that their parent’s illness is no one’s fault.

Having the support of friends with a similar experience can also be an immensely helpful way of communicating to children that they are not alone. One of my closest friends also has Bipolar Disorder. We met in hospital, when our first children were babies, and our children have been in each other’s lives since then. They have witnessed their mothers supporting each other through illness, and they all share a special bond of having had a parent in hospital being treated for a mental illness. The ease with which these children let the topic of mental illness slip in and out of their conversations is very different to the average conversation about mental illness between adults. It gives me hope that the next generation can be taught to think of it without the dead weight of stigma getting in the way of timely diagnosis and treatment.

We make a choice about whether and how we talk to our children about mental illness, and by opening up communication in a factual, compassionate manner, we are making a choice about how we want our children and the following generation to be treated and to treat others, when they encounter mental illness. I say when not if, not to be pessimistic but because mental illness is so prevalent, and because it is so often hidden away. You may not even be aware a family member or friend has it in their lives.

If your family is lucky enough to be untouched by mental illness so far, have these conversations anyway. It might give your child the tools to one day get help themselves, or reach out to a mentally ill friend and make the difference between them or that friend surviving their illness… or not.

What Does Someone With A Mental Illness Look Like?

12 thoughts on “Talking About Mental Illness With Children”

Celebrated my husband's birthday in captivity with a lot of baking and cooking today. We are not novices at having a celebration changed or even cancelled by illness. Mental illness, like Covid has no respect for special occasions or carefully laid plans. I spent our 10th and 15th wedding anniversaries in hospital with Bipolar episodes. Another year we had to cancel a trip to Paris because I was barely out of hospital. These experiences of uncertainty and disappointment teach you to make the most of what's in front of you and take nothing for granted. These experiences have also given me the solid knowledge that there is no one I would rather be isolating with than the person whose birthday prompted a busy day in the kitchen. #happybirthday #baking #birthdaybaking #covid #isolation #bipolardisorder #mentalillness #specialoccasions #loveis
Writing 'happy' infront of Bipolar feels counterintuitive because it doesn't feel happy when I'm in the middle of an episodes. That includes manic episodes for me. It's a myth that mania is fun for all of us. It can be just as debilitating as depression. But there are happy aspects to living with this illness. Each time I survive it, I gain even more strength, resilience, and insight. Several of my best friends live with this illness too. They are also among the strongest, most resillient, and insightful people I know. To those friends: Let's celebrate ourselves and each other today! XX #worldbipolarday #bipolardisorder #friendships #strength #resilience #insight
How is your household's mental health right now? Regardless of where it's at you can do things for yourself and each other to improve it. Check out the new Thought Food post. Link in bio. #Covid #mentalhealth #mentalillness #socialdistancing #quarantine #mentalhealthtoolbox #psychology #psychiatry #mentalhealthhistories #compassion #stress #anxiety #depression #helpeachother #newnormal #thoughtfood #bipolardisorder #writersofinstagram #brisbaneblogger