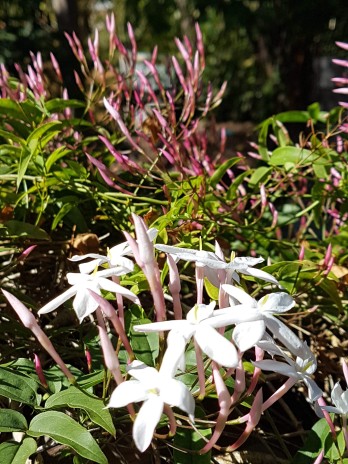 August is birthday month for me, several family members and friends, and is heralded by jasmine buds pointing their tender, pink noses at the sun all through late July. If I had no devices to track time with, I’d know August is here when those buds burst open into white flowers, suddenly like popcorn, perfuming the air with the anticipation of a fresh year.

Given how excited I get over cake and a party you could be forgiven for thinking I’m six. I’m about to turn forty-five. And I’m finding increasingly that people of my vintage grimace at, rather than celebrate being a year older. This puzzles me for several reasons. Still being alive is one of them. Then of course there’s cake.

I would also hate to be younger.

When I look back over my previous adult decades, I’d take my twenty-year-old metabolism and eyesight, but that’s it.

My twenty-year-old self did not know me well at all. She thought she did, but she really didn’t. At twenty I was a skittish commitment-phobe who kept the man who would one day be my husband and father of my children at arm’s length for years. It is a testament to his endurance and stubbornness that he stuck around long enough for me to recognise how well suited we are. At twenty I was ambitious, and tunnel visioned. It was my way or the highway all the way. I pushed myself and worried about how my life would turn out.

If I could tell my twenty-year-old self something helpful (although I doubt she would listen) I would say:

‘Loosen your grip on the need for perfection. You are strangling the fun out of yourself.’

I wouldn’t like to be thirty either. At thirty I’d achieved the goals I’d set myself at twenty, and found it still wasn’t enough. I’d also been kicked in the pants by my precious career a couple of times. There’d been the ‘washing machine in the cat flap’ incident (see Modern Martyrdom). There’d been an episode of burn out. I still loved my work but was beginning to see how destructive chaining all my self-worth to my career might be.

The best things in my life weren’t found on my ‘to-be-achieved’ list. Like my marriage. And for the first time I was uncertain of what I really wanted. Up until my thirties I’d always felt vehemently opposed to having children. I was daunted by the irreversibility of this choice. But suddenly this daunting prospect battled with an increasingly urgent awareness that this decision had an expiry date.

I’d tell my thirty-year-old self:

‘Starting a family will be one of the most precious and hard-won things to come out of this decade.’

And I’d tell her:

‘You have no idea how strong you are. You will face much harder things than having children, and you will come out on top.’

I wouldn’t like to be forty again. My forty-year-old self was still learning the difference between things that were under her control and things that were not. That sharp, harmful streak of pushing herself until she broke had weakened, but not yet been eliminated. She still sneered at any of her small achievements, because they were small. She still fought desperately to get back to exactly who she was, as she recovered from each episode of Bipolar Disorder.

‘Trying to be who you were before adversity is going backwards. That adversity may feel shitty at the time, but it is powerful fertiliser. It helps you grow stronger and more compassionate. Stop struggling to swim backwards and concentrate on what’s ahead for you.’

I am at an age now, when some people enter a midlife crisis: A loss of self-confidence and anxiety about their age, causing them to seek external validation.

It’s a bit like re-entering the teenage years, which might explain why I don’t feel the need to repeat myself. At sixteen and seventeen falling into a secret liaison with someone handsome of a significantly different age, who flattered me yet was utterly unavailable, was the ego boost I needed to keep me afloat on the stormy seas of high school life.

Doing the same now would feel like eating a bag of sugar cubes. The first few might taste good, but  pretty soon the nausea of consuming something of no nutritional value would set in, and in the end, I’d be left with nothing but the mood crash after a sugar high.

I need some midlife comfort, not a crisis.

I have spent my life so far feeling profoundly uncomfortable in my comfort zone. Too long between new horizons and I stagnate. And while I have absolutely no intention of breaking out the elasticated pants version of my life permanently, I do intend to benefit from the wisdom of (nearly) forty-five. And it tells me it’s ok to loosen my belt a little sometimes and revel in the comfort (not to mention room for extra cake) this brings.

Making Sense Of It

I'm generally not a huge fan of dressing animals up. These first two pics were taken after being persuaded to buy Chrisas pyjamas for Nina and Alfie. We didn't keep them in them for long, but long enough to capture how different these half siblings are.
Ocean effects...
A new Thought Food Post has dropped. It deals with how I feel about humour surrounding mental illness. This image and experience is one of many I missed in 2015, courtesy of some hospitalisations that went for months...and in combination with reading the post may go some way towards explaining my stance on humour in this space.
Introducing our new babies, Nina and Alfie. Velvet soft with needle sharp claws, producers of purrs and poo. It is impossible to be in the same room with these two and not be flooded with joy.
My library author talks at West End and Fairfield libraries originally booked in July have been rescheduled and are happening soon. Check website in image for details.
Mid last week Mamamia contacted me for a comment on whether I thought Kanye West's recently Anti-semitic misogynistic behaviour was due to his mental illness or not.
Loading Comments...
%d bloggers like this: