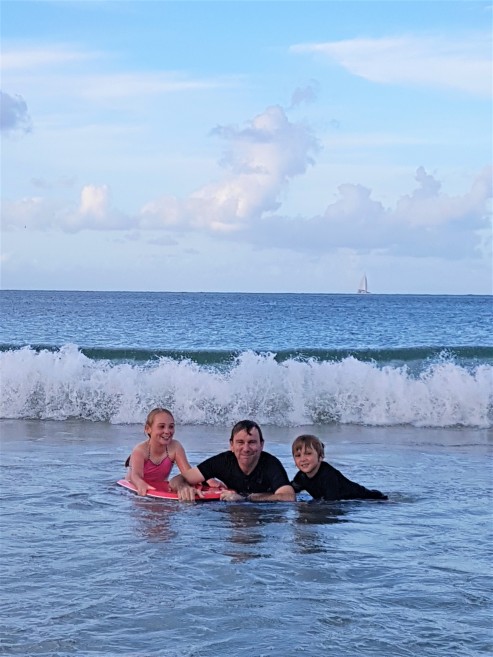 The strands in my children’s heritage are tightly intertwined, multicultural, and impossible to untwist from each other. History labels their predecessors perpetrators and victims, depending on which of their ancestral branches you examine.

A photograph of my maternal great grandmother hangs in my hallway. She looks serious. In mid 1920s Warsaw. Dark haired and dark eyed. My grandmother, aged three or four, stands next to her in a light dress, their arms linked.

My maternal great grandmother was too attached to her country. Fatally so. To me, she is a cautionary tale of the danger of fastening yourself too tightly to one part of the world.

But I only know fragments of her story:

My grandmother (in the light dress) was about nine or ten when she emigrated from the Jewish ghetto in Warsaw to Australia with her parents.

Shortly after their arrival, my great grandmother looked around at the vast, bright country she found herself in and decided it was too foreign for her. She pressed some coins into my grandmother’s hand and sailed back.

In doing so she inflicted a lifetime of trauma on my grandmother and signed her own death warrant. Her life was erased by the Holocaust that ripped through the country she chose over her daughter. A daughter who would be orphaned in the vast, bright country at twelve, when her father died just a couple of years later.

I was born in Germany, lived in Saudi Arabia from ages one to five and returned to Germany just before my sixth birthday, in time to start school.

Many German born children of my generation were infused with guilt. We read When Hitler Stole Pink Rabbit by Judith Kerr in primary school. The older grades took school excursions to former Nazi concentration camp sites. This shameful chapter in Germany’s history was rightly not denied or underplayed.

And the whole world pointed its finger at us. At least it felt that way when I moved to Brisbane with my family aged thirteen.

Almost as soon as I started school, a chunky, pimply, blond boy in my year began greeting me with a Nazi salute and yelling ‘Heil Hitler!’ every time he saw me. The other kids stared as though I were personally responsible for Hitler’s actions. Each time it happened I was swallowed by a boiling pit of mortification and anger.

I already owned my German guilt. Guilt with a twist. The country I’d been born in, whose language I spoke flawlessly, that was home to all of my friends, whose seasons, landscapes, and culture I loved, had in recent history been responsible for the genocide of my mother’s family’s people.

My guilt and that knowledge had already curdled uncomfortably inside me, before that boy began hurling the only, and highly offensive, reference point he had for German people, at me.

My maternal grandfather’s Jewish roots can be traced back to 16th Century Portugal. It is one half of where my children’s dark eyes come from. Their high foreheads and cheekbones travelled from Latvia and Germany via my father. The shape of their chins can be traced back to English ancestors from my husband’s family.

My children are both first and seventh generation white Australians.

It is messy alright.

My ancestors didn’t happen to be in Australia when white people invaded and began inflicting trauma that is still ongoing on the First Nations People. But my husband’s predecessors landed here as missionaries ten years after the first fleet.

Does any good ever come from entering a foreign country aiming to convert its peoples to a belief system not their own?

I don’t believe so. No matter what the intent.

And no matter how much I love the descendants of those missionaries, my guilt echoes around that family history. It feels similar to the guilt I felt as a German child of the early eighties.

Yet, guilt on its own achieves nothing unless it pushes us towards acknowledgement and action.

Over the last weeks I have researched and asked advice from people with Aboriginal or Torres Strait Islander heritage on wording an acknowledgement of Country and its First Nation Peoples to include in my book. I am so grateful for their time and knowledge.

I am still working on the exact wording. But I plan to include this (slightly reworded) content from an acknowledgement by the Climate Justice Union:

‘I appreciate I have much to learn about the oldest continuous living culture. I am listening, seeing, and learning.’

We are all capable of listening, seeing, and learning – in some form.

And when my children look at their own hallway photographs one day, I hope they will be proud of their incredible hybrid vigour, know where they came from, but also that they are honoured and should be thankful to travel safely over Aboriginal and Torres Strait Islander lands.

You can find an excerpt of my book, which is due to be published this year (Covid permitting) here:  Book  and the story of  the book’s journey here: Accepted: Crumbs To Canary Wharf

New Thought Food content - link in bio. It's a glimpse into my last few weeks and a look at senses we can take for granted.
I'm generally not a huge fan of dressing animals up. These first two pics were taken after being persuaded to buy Chrisas pyjamas for Nina and Alfie. We didn't keep them in them for long, but long enough to capture how different these half siblings are.
Ocean effects...
A new Thought Food Post has dropped. It deals with how I feel about humour surrounding mental illness. This image and experience is one of many I missed in 2015, courtesy of some hospitalisations that went for months...and in combination with reading the post may go some way towards explaining my stance on humour in this space.
Introducing our new babies, Nina and Alfie. Velvet soft with needle sharp claws, producers of purrs and poo. It is impossible to be in the same room with these two and not be flooded with joy.
My library author talks at West End and Fairfield libraries originally booked in July have been rescheduled and are happening soon. Check website in image for details.
Loading Comments...
%d bloggers like this: