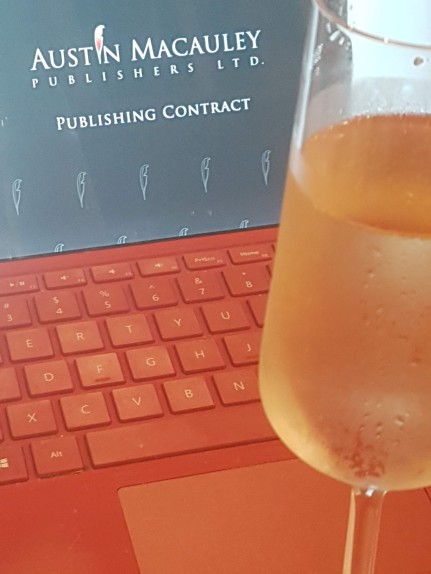 It started on the paper bag that the breakfast toast came in. First, I shook out the crumbs to give me an even writing surface. I had no other paper. I was inside the SCU (Special Care Unit), in a psychiatric hospital in August 2006, emerging from my first psychotic episode. And as the medication slowed my boiling brain, a miniscule part of me, took in my environment and thought:

‘I am one step away from a padded cell. Unbelievable. But while I am here, I will record as much as I can, because not many people experience this.’

So, I made my words tiny to fit as much detail as I could onto the toast bag.

Over a year later I wrote an account of my psychotic episode based on that bag and some diary entries. My supervisor for my Master of Arts in Writing Editing and Publishing read it.

‘This is really good writing. You should consider expanding it into a memoir.’

I went away happy, wondering if I could. I began in fits and starts. My supervisor kindly read early drafts and offered advice. I finished it in 2009. Then I had a second baby, got sick again and was definitively diagnosed with Bipolar 1 Disorder. That provided the material for part two of the manuscript I thought I’d completed.

Over the next six years I chipped away at it agonisingly slowly. I parented my children, worked part-time as a vet, and slotted my writing in where I could. I experienced severe bipolar episodes every two to three years. These could hospitalise me for months during which I’d be too incapacitated to write.

By 2014 I had worked through the manuscript so many times I could no longer assess it objectively. I submitted it to a professional editor for a manuscript assessment. The feedback on the quality of the writing was very positive. It also included pages and pages of editorial recommendations to polish it further. It took another two years to incorporate the recommendations into the next draft.

By September 2016 I finally felt I had the best version. I sent a copy to my now ex university supervisor who sent it to her literary agent. The agent (one of the most highly regarded in the country) loved it and offered to represent me and my manuscript.

I felt as though I’d won the lottery.

Finding an agent who agrees to represent you is challenging. And getting unsolicited manuscripts (those not represented by an agent) past publishers’ slush piles (the mass of submitted manuscripts, which are rarely published) is nearly impossible.

My agent sent my manuscript out to the first round of publishing houses. She reported back similar feedback from all of them:

‘They love your writing. It’s a powerful and important story that needs to be told. The creative department will take it to a requisitions meeting and get back to us, but it’s looking good.’

The optimism and hope flooding me seemed appropriate.

I didn’t realise how much I would come to loathe the words ‘requisitions meeting’.

Over the next two years many publishers were complimentary about my writing. I didn’t get any feedback suggesting they would not publish my work because the writing was rubbish. I did get a lot of regret from creative departments because they could not get their requisitions (financial) departments (who saw no commercial value in my work) on board.

I became very practiced at receiving rejections, one after the other despite having a good manuscript and a fantastic agent. At one point my agent suggested shortening it, so I edited out 20 000 words. Nothing changed.

After being rejected by all my agent’s publishers, I had some decisions to make. I felt even more determined to get this manuscript published. Not enough first-person accounts of severe mental illness featuring psychosis exist. I also hadn’t survived twelve years of this illness and written a book about it to be silenced by a clump of scared requisitions departments.

I started to research self-publishing. This means outsourcing and coordinating everything yourself. Formatting, copy editing, cover designs, printing, ISBN registration, media releases, marketing. The cost, if done to a professional standard, can be prohibitive.

Then I sent my manuscript to one last publishing house. The main office for Austin Macauley Publishing is at Canary Wharf, within walking distance of my old address in London. They have several international branches.

And one joy filled evening about two weeks later, a publishing contract from them landed in my inbox.

They had the same positive feedback about my writing and the same concerns about the commercial value of my work as the other publishing houses. But instead of rejecting it, they offered me a contributary contract. This meant I would contribute some of the cost of producing the book. This reduced their financial risk, but they claimed to do all the things I would have had to outsource if I’d self-published.

My memoir is not ‘commercial’. We don’t yet live in a world where mental illness featuring psychosis is given enough understanding, compassion, freedom from stigma, government funds, or charitable fundraising for that to be a reality.

But perhaps this story being published might bring us closer to a time when writing about severe mental illness is deemed less commercially untouchable.

My memoir Abductions From My Beautiful Life was finally published on April 30 2021. and is now available widely online including on Amazon, Fishpond, Booktopia, Waterstones UK, Austin Macauley, and Barnes and Noble.

You can find all the details on how to get a copy and launch information at the end of this post: Welcome To The World ‘Abductions’

What is your worst travel nightmare?
In case you were wondering what 'Abductions From My Beautiful Life' is all about, check out this book trailer. Sound on for some piano accompaniment.
A new Thought Food post has dropped. Titled 'Deciding To Hope' it deals with having a holiday Covid cancelled multiple times and the rationale behind remaining hopeful in the face of possible or even likely disappointment.
This Thought Food post poses a couple of questions about (and to) freedom fighters about how they choose which pieces of medical advice to accept and which to reject. It's an opinion piece, with a bit of prickliness to it. Feel free to discuss and share. Click on link in bio to read.
This local book club (including Rachel who took this photo) read ' Abductions From My Beautiful Life' and invited me to join them for a chat about it last night. I thoroughly enjoyed an evening of catching up with these lovely women and answering lots of great questions about the book.
I wrote a letter from myself today to myself in 2006 on my first baby's birthday, titled 'Welcome To Motherhood' I definitley have a better idea of what I'm doing now. To read some of the thoughts and suggestions I had for my new mother self - hop into the link in bio.
Loading Comments...
%d bloggers like this: